On October 3rd, 2015 a team of four experimented swimmers, crossed the English Channel. Following is the interview of one of them Brian who is also registered on the site with the pseudo @shayadiehaai. A French version will be published this week.

When did the idea of crossing the Channel occur to you?

I used to do a lot of open water swimming in South Africa when I lived there, when we moved to the UK in 2001 it took me a while (did triathlon for a while), to acclimatise to the cooler temperatures. In 2004 I gave up on triathlon to concentrate on open water swimming and joined the Brighton Swimming Club – who are legendary Channel swimmers. We had two swimmers organising their solo swims in 2006, one of whom had to change to a six person relay because she injured herself – so I got involved with that relay, which we did through the CSPF and finished in a time of 13 hours 47 minutes.

I then changed club to the Redhill and Reigate Swimming Club (much closer to home) and got involved in the Masters Coaching, in the pool, but still on my own kept swimming open water whenever I could.

This relay was a result of a few of us chatting about epic swims, one of the club members started getting people to join the team – only then to withdraw himself! 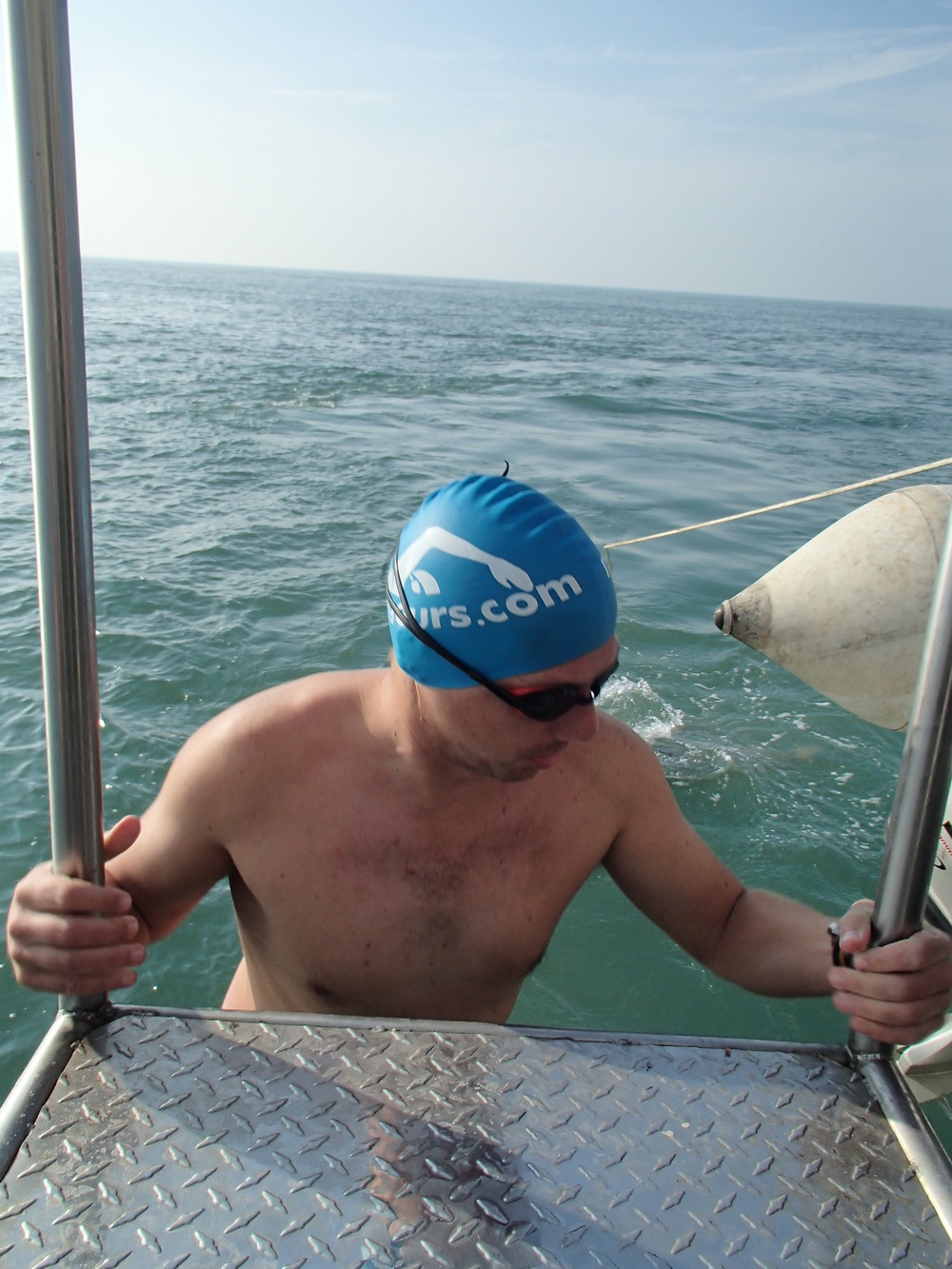 How did the relay team get together? Can you tell-us more about each swimmer taking part in the team, including yourself (age, previous races, average speed, can you tell us about your performance at the Monte-Cristo race – when was it and what was your result…)

There were four of us in the team, Martin Warren who is an experienced pool and fresh water swimmer, Daryl Cygler (originally from Australia, but living in the UK now) who started from a pool swimming back ground, Penny Marie-Newcombe a swimming coach and national age group triathlete and myself, part time pool swimming coach and open water swimmer who accepts that the UK water is too cold to have a decent swim in winter and so accepts training in a pool!

I try to find races whenever I travel (and sometimes travel to races), did la Defi de Monte Cristo last year after falling in love with the calanques and the area around Marseille the year before – reminds me a lot of Cape Town… just a lot quicker to get to from the UK! The Defi was fabulous at one point I almost stopped when looking down and realising that I was swimming over a really big school of fish, which I could see wonderfully clearly through the clear water… 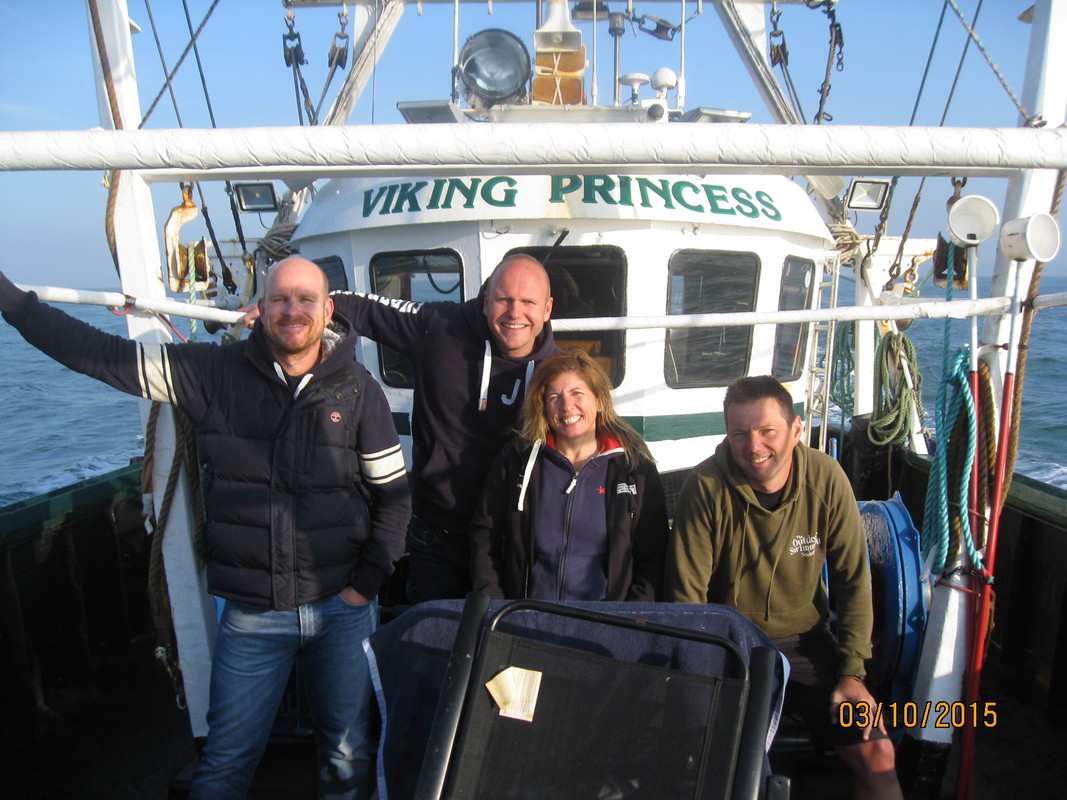 How did you train for the Channel crossing (When did you start training for the crossing? Where? What distances would you swim? How often? Did the team swim together on a regular basis?)

Swimming a lot… there are probably a lot of people who strictly follow a program, but basically you need be fit, have your head focussed on what it takes and be acclimatised to the water. So long as your training does this, you will have no problem. One of the big shifts is not thinking in terms of distances, but in terms of time, so when we started at the end of April we were swimming for only a few minutes (water temperature 8-10 degrees – you shake for a long time afterwards!) and then slowly extend one’s swims as the water temperature increases – that is pre-crossing regularly up to 6 hours for solos, 2 x 1.5 hours is normal, often though one does a 2 hour swim with a quick hour swim after that! Due to work commitments we didn’t swim together often as a team, but twos or threes at most. When you are out in Dover harbour you lose the others quite quickly, so one becomes quite used to swimming for a long time alone. That said, it is really nice to swim along another swimmer going the same pace as you. One of the things one is really aware of in Dover is the sense of privilege of swimming with people from all over the world, all taking part in this awesome shared challenge. 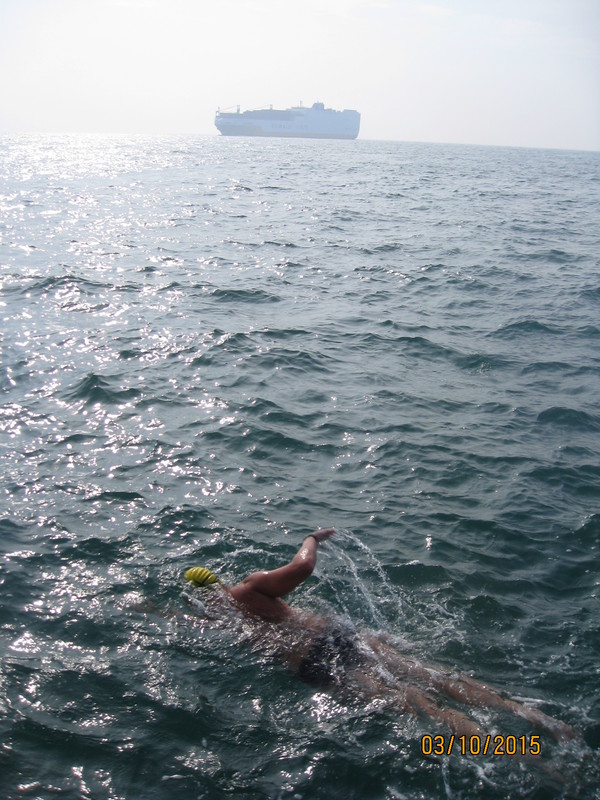 Do you have a coach?

Well two of us are coaches, but that isn’t the role we played in the team – I was able to talk about my last swim, but every swim is different so one can only advise so much. The coach we did have has the Dover General – Freda Streeter, (whose daughter has swum the Channel more times than I can count) – who is the Beach Master at Dover – she monitors you, tells you how long you are going to swim and whether that is as a single swim or swim then repeat. Do what Freda says… she is the boss.

Do you practice other sports ?

Not anymore, used to take part in Triathlons (but my running is pretty poor… I get bored easily) though I did for two seasons do off road trail running during winter…

Did-you have a particular diet?

No, but I do enjoy a glass or so of good red wine… and steak – South African!

How did you face the low temperatures of the sea?

Acclimatise – decide you are going to do it, then get your head down and swim…

How did you divide the 40kms crossing between the 4 of you?

Well… straight across the distance is 22Miles which is about 35Km, but you don’t go straight, the tides and current push you up and down the Channel…

Each team member goes in for an hour at a time, followed by the next, until the first member goes in again, you need to keep the same order, so if you are feeling ill from sitting in the boat when your turn comes up… well tough, either your team gives up or you swim… you swim! 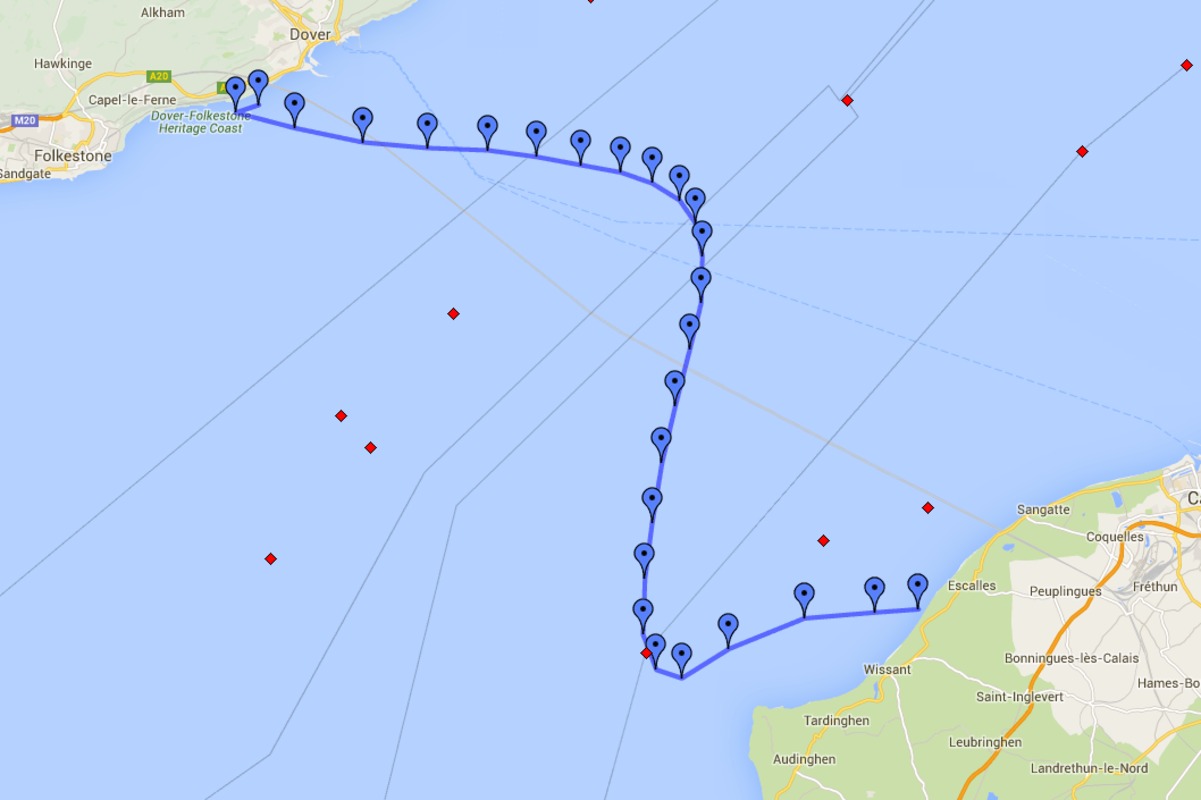 You started the crossing in the middle of night: how did you guide yourself ? Did you have any lights?

One swims quite close to your pilot boat, but you also have a LED strobe light on your head and one or two lightsticks pinned to your costume…

Did you suffer/ feel any pain during the crossing?

Cold yes, suffer no, we were supposed to swim early September, but the weather didn’t let us, so we waited and waited, until the beginning of October, by which time the air temperature is quite a lot cooler, until the sun came out we spent quite a lot of the morning shivering… My shoulder felt quite sore whereas others felt sore in their legs or elsewhere – nothing unmanageable. The worst part of it all was when one wasn’t swimming sitting on the boat, which was rolling about a lot – even in calm seas – as it has to go the same slow speed as the swimmer… one team member was really hit hard by sea-sickness…

What is your best moment and worst one of your adventure?

Worst – when I thought I might have to drop out last week to look after my wife who has just had major surgery – thankfully her mother stepped in and saved me… she is a star!

Best – running in on the beach at Wissant – to a wonderful warm French welcome from all the people who had walked down the beach to meet us… thank you.

What were your thoughts while you were swimming over?

Lots of stuff, like, “Argh! Jellyfish” or, “Oh boy, look at the boat rolling around… glad I’m swimming!” – but, in seriousness one goes into a zone where one thinks a lot about nothing…

Was the race sponsored?

A couple of the team raised sponsorship money for charities, I didn’t as I will do so for the “Alzheimer’s Society” when I do my solo – otherwise all fees, pilot and medicals were paid for by the team themselves.

How did you feel just after the crossing? What were your first words and thoughts? 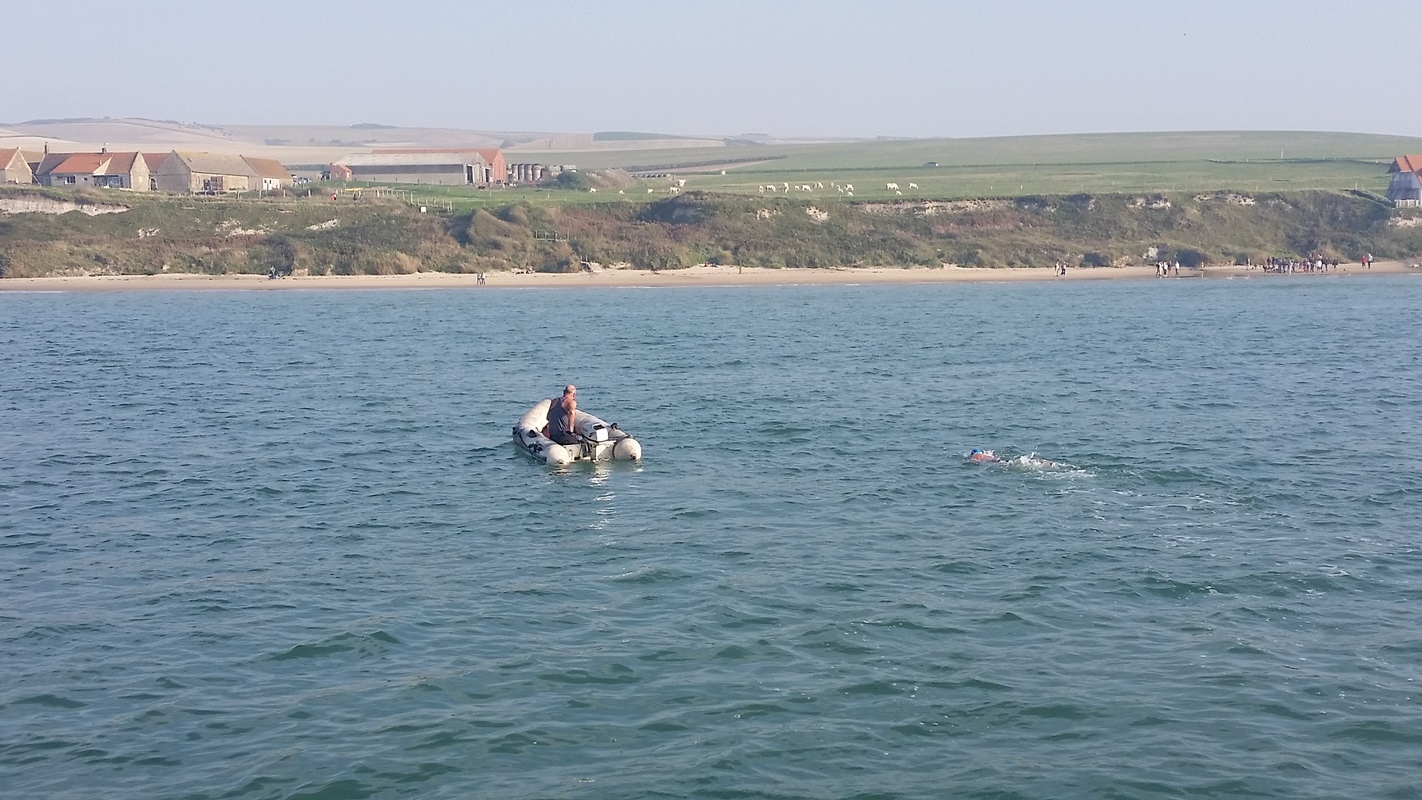 What are your next projects?

Not sure yet, I have a friend who was supposed to swim with the other Channel organisation (CSPF) this year, but his team one by one withdrew, so I might have my arm twisted to do a relay with him next year… or maybe with the Nageurs.com team…maybe I’ll do the length of Windermere – 10.5 Miles nice scenery, no jellyfish.

Could you/ Would you like to take part or guide a nageurs.com relay team crossing the Channel (this could be a team of more or less 10 swimmers for instance)?

I will need to work on my French – much harder!

I think the optimal numbers for a relay is between 4 & 6… There isn’t space for 10 people on most of the pilot boats… plus you want to go in at least twice… or more!

Thank you Brian, and congratulations!! 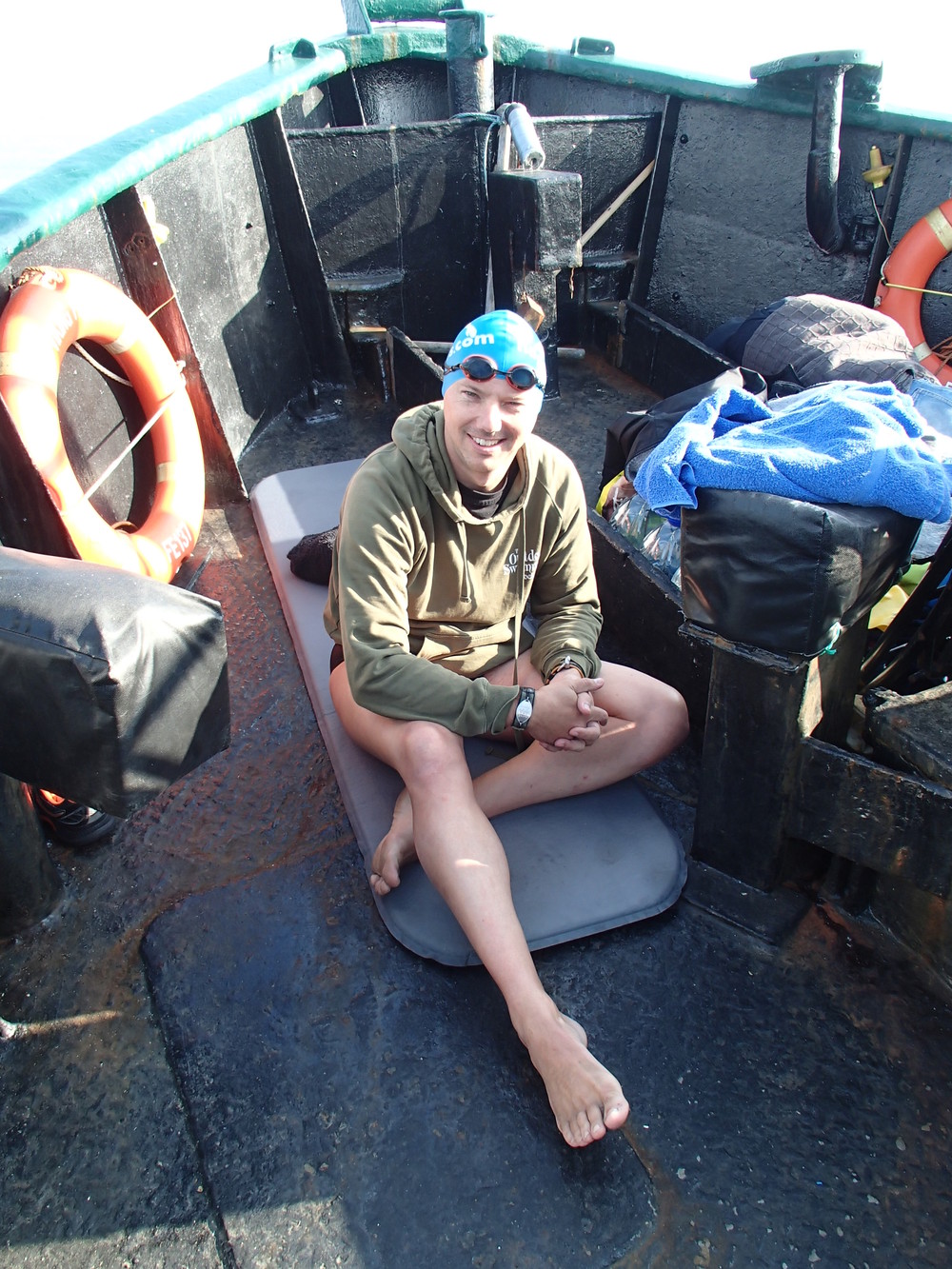